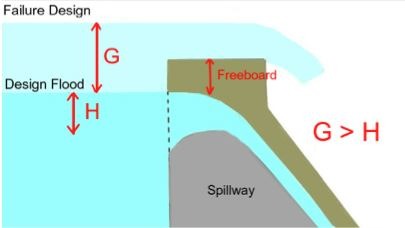 Freeboard is the vertical distance between the crest of the embankment and the reservoir water surface. Free board can be defined in different terms such as:

Normal freeboard is defined as the difference in elevation between the crest of the dam and the normal reservoir water level as fixed by design requirements.

Minimum freeboard is defined as the difference in elevation between the crest of the dam and the maximum reservoir water surface that would result should the inflow design flood occur and the outlet works and spillway function as planned.

The difference between normal and minimum freeboard represents the surcharge head. If the spillway is uncontrolled, there is always a surcharge head; if the spillway is gated, it is possible for the normal and minimum freeboards to be identical, in which case the surcharge head is zero.A distinction is made between normal and minimum freeboards because of the different requirements for freeboard if surcharge head is involved. The normal freeboard must meet the requirements for longtime storage. It must be sufficient to prevent seepage through a core (Dams) that has been loosened by frost action or that has cracked from drying out; otherwise, zoning must be provided to control this condition. This is of particular importance for a dam whose core is a CL or CH material and is located in areas with either a very cold or a very hot dry climate. The normal freeboard must also be sufficient to prevent over topping of the embankment by abnormal and severe wave action of rare occurrence that may result from unusual sustained winds of high velocity from a critical direction.Minimum free board is provided to prevent overtopping of the embankment by wave action that may coincide with the occurrence of the inflow design flood. Minimum freeboard also provides a safety factor against many contingencies, such as settlement of the dam more than the amount anticipated in selecting the camber, occurrence of an inflow flood somewhat larger than the inflow design flood, or malfunction of spillway controls or outlet works with an increase in maximum water surface above that expected. In some instances, especially where the maximum probable inflow is used as a basis for design, the minimum free board may be established on the assumption that the dam should not be overtopped as a result of a malfunction of the controlled spillway or outlet works that would result from human or mechanical failure to open gates or valves. In such instances, allowances for wave action or other contingencies usually are not made. 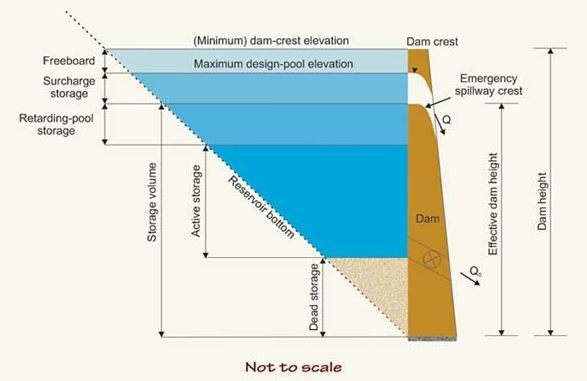 The rational determination of free-board would require determining the height and action of waves. The height of waves generated by winds in a reservoir depends on the wind velocity, the duration width of the reservoir. The height of the waves as they approach the upstream face of the dam may be altered by the increasing depth of the water, or by the decreasing width of the reservoir. Upon contact with the face of the dam, the effect of waves is influenced by the angle of the wave train with the dam, the slope of the upstream face, and the texture of the slope surface.The sloping face of an earth-fill dam reduces the impact with which waves hit the dam. The rough surface of dumped rip-rap reduces wave run up to approximately 1.5 times the height of the wave; whereas, the run up for smooth surfaces such as concrete is considerably greater. Because there are no specific data on wave height and wave run-up, the determination of free-board requires judgment and consideration of local factors.

It is believed that no locality is safe from an occurrence of winds of up to 100 miles/h at least once during a period of many years, although a particular site may be topographically sheltered so that the reservoir is protected from sustained winds of high velocity. Under these conditions, wind velocities of 75 or even 50 miles/h may be used.For the design of small dams with rip-rapped slopes, it is recommended that the free board be sufficient to prevent over topping of the dam from wave run up equal to 1.5 times the height of the wave, measured vertically from the still water level. Normal free-board should be based on a wind velocity of 100 mi/h, and minimum free-board on a velocity of 50 mi/h. Based on these assumptions and on other considerations of the purpose of freeboard, the least amount recommended for both normal and minimum free board on rip-rapped earth fill dams, the design of the dam should satisfy the most critical requirement. An increase in the free board be required if the dam is located in a very cold or a very hot dry climate, particularly if CL and CH soils are used for construction of the cores. It is also recommended that the amount of free-board be increased by 50 percent if a smooth pavement is to be provided on the upstream slope. The above methods for determining free board requirements are adequate for small dams.

Unable to Login? We are here - onlineengineering0@gmail.com
shopping_cart Cart ( Items )
There are no items in your cart